One of the embarrassing incident I remember from school: I was in 6th or 7th standard, roaming the corridors with couple of friends. I threw a toffee wrapper and got caught by a rep, made worse in my immature opinion to be caught by a girl, that too someone from a standard below me. Grudgingly, I swooped down to collect the wrapper. Disciplined to not throw garbage from young age does help in making it a habit.

Coming to this trek, I'll be frank that the lure of flagging Skandagiri also played a role whilst enlisting for clean up drive. After hard toil on a Sunday by 53 BTCians, I feel it is best to let the place remain closed to trekkers as well as the special permission required even for a green initiative. 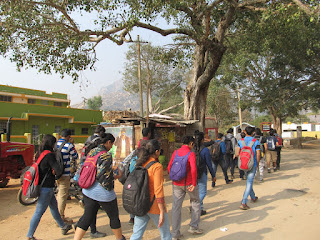 Planning such a behemoth event was top notch from BTC. From organizers starting very early in the morning to arrange breakfast and lunch, to procuring bags, masks and gloves, to dividing the tasks and co-ordinating and finally sending off 860 kilograms for recycling. About 30 members reached the venue on bikes and cars while the rest of us took to public transport. 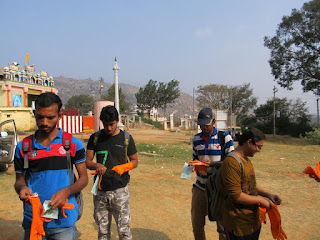 We reached at half past 9 AM, having first taken bus (luckily got Rajahamsa one with push back seats and better leg space :P) to Chikkaballapur and then another to a village about 10 minutes walk from Skandagiri base. Virander and co were waiting for us - we quickly had breakfast, got lunch parcel and then the cleaning equipments - gloves, masks, bags and ropes to tie them later. Next a round of introduction and getting assigned teams (total five teams, one to clean at top, two teams along the path and other two at hill base and around the temple/parking lot) 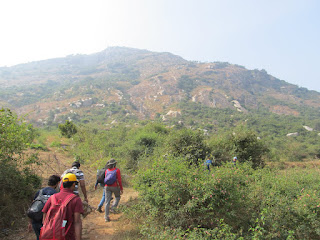 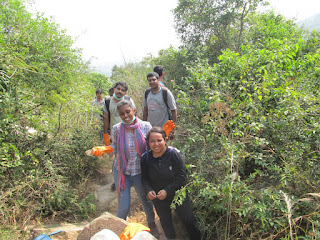 Finally, around 10 AM, with Sun shining hard on us, we were ready to go. The hill rose to our left with village fields all around us. Right from first foot on the hill to top, we had a tough slope to climb with just small stretched of flatter winding paths. Along the way we met the teams collecting trash (many bags already filled) and resting. 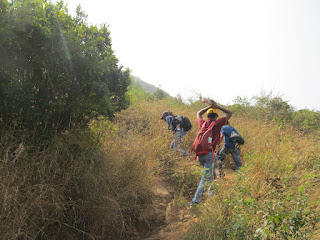 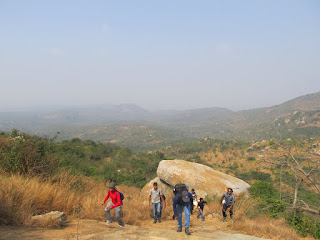 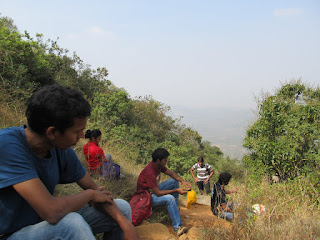 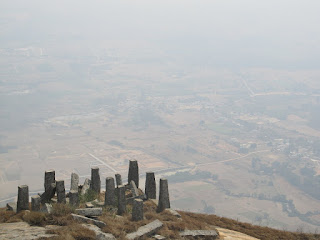 Our team was going to peak directly. We took breaks often, to rest and quench our thirst despite the need to preserve as much water as possible.  After finally reaching the top about 100 minutes from start, we took another brief rest. Chaitanya's team were already at work at one small section of the vast area. 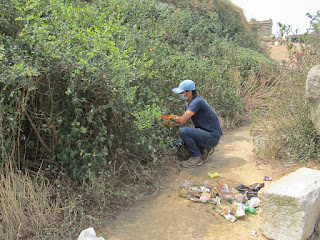 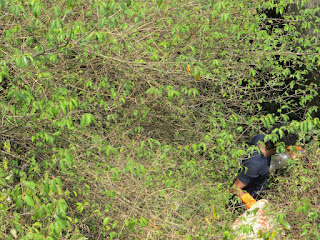 For next hour and half, we tried to clean the section starting right from the path joining the peak. While some were easy picks, most trash were trapped in bushes, often near thorny plants or not easily accessible corners. Grassy area between boulders had been burnt off, reducing trash and leaving glass bottles half buried and broken. Small glass pieces were a nuisance. Water bottles were emptied of any remaining water and crushed to save space. 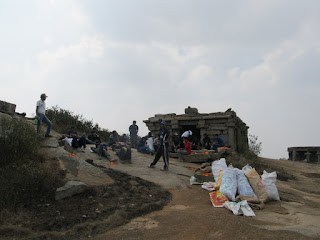 Amidst all the hard toil, we had a pleasant luck - someone had left behind pack of unopened water bottles (presumably when trek was still allowed). They were still within expiry date and cool due to packing. It helped us a lot in our water needs (despite most of us carrying two liters of water from base). By now, members from team 2 and 3 had joined us as well. 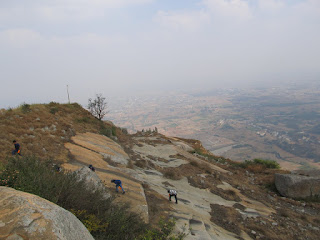 After lunch, we spent another hour of trash picking - this time a section to the side facing towards Nandi hills. It was a short climb down as well, with much wider area. Again, our task was heavily impeded by bushes and thorns. Scratches on our arms and legs were proof of that. We had to be careful despite the gloves as thorns and glass pieces could easily pierce (some got torn due to heavy use). Some plants grew from inside of broken glass necks, some place had tiny snails clinging to undersides of plastic and paper.

No matter how many bags we filled, there was always more to be picked. So many water bottles to be crushed. We plowed on as best we could, stopping only when we felt we couldn't carry anymore. And even then it turned out to be much more than expected, especially those carrying the very heavy glass bags. 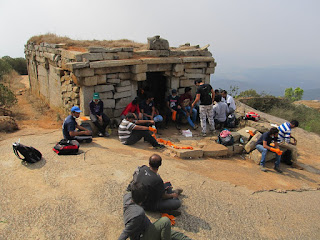 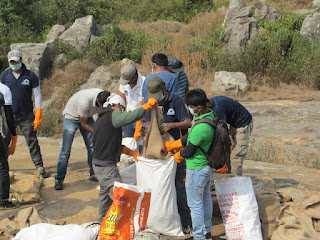 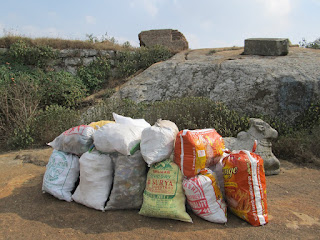 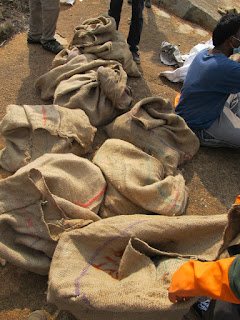 Some of us rested and carried conversation on various topics, while others compressed and repacked as much as possible. Few minutes to 3 PM, we started our trek back - most carrying two bags (filled with plastic, paper, metal, etc), others either a single heavy glass filled bag or mix of the two. 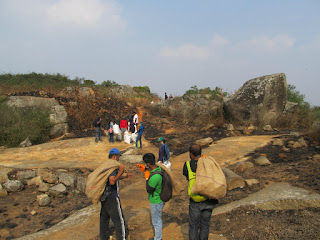 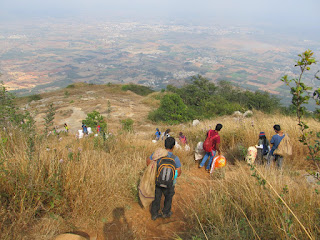 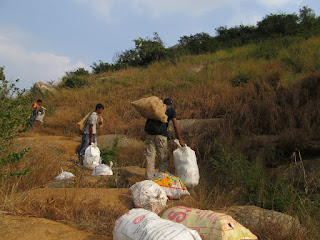 The plastic ones generally were not tough to lift with one hand upto knee level, but carrying two on downward slope for hour and half was definitely hard and tiring, especially with our low water rations. We did take as many breaks as we wished, throwing the bags down where possible. The ones with heavy luggage preferred to continue as soon and as fast as possible with fewer breaks - hats off stuff really! 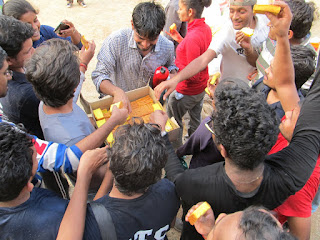 Apart from clicking photos and applause on reaching back, water can and snacks were arranged. With everybody assembled in one place, it was time for greeting known faces and cracking jokes. Later, we lined up around all the garbage bags for group pics, that alone took a while :P Then the bags were loaded into mini van to be taken to recycling - BTC later communicated that they weighed in total about 860 kilograms! 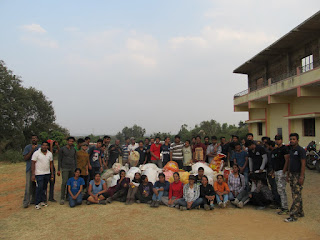 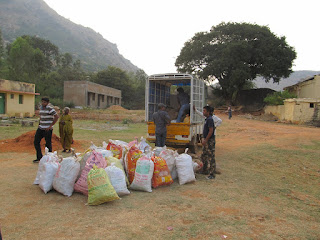 After lengthy feedback session, where unanimously everybody was happy being part of this wonderful initiative as well gave suggestions for improvement, we were on our way back to Bengaluru. We got Rajahamsa yet again and had plenty of trekking and traveling stories to pass time.
Afterword:

Prevention is definitely better than cure. Simple rule - carry your own trash back. And experience is a better teacher than reading/viewing about something - we saw for ourselves how much things can accumulate over time and how much more it is difficult to clean than it is to throw.
Posted by Sundeep at 3:37 PM

Well said Sundeep! Even I got this good habit since childhood! Even I tel my friends and others not to litter ask them to pass on the word!

hope the awareness spreads to all :)

Hats off to the work you did Sandeep. I agree the place should be remained close until and unless we all learn to keep nature clean and have responsibility of taking care of nature.
I hate when people throw plastic, paper, bottles from the car and most of them are educated elders. When this will change no idea.
Great work by BTCians!