After my last trek to Makalidurga, MS classes and other things kept me away from treks. So, as my sem exams approached, I started planning for trek. Jan 26 was the first holiday available and BMC had a trek to Antaragange on that very day. Being Wednesday, I knew some of my friends would be available and I was pretty much desperate from 1st week of Jan for the trek. After all, Antaragange was my first trek and the place where I found my love for trek.
Initially, I had 5 of my friends convinced for the trek with possibility of further additions, but finally came down to just two - my room-mate Prakash and colleague Thiru. Still, better than none in my previous two treks. But come Jan 25 evening, I wasn't much excited about it. Partly because of the exhausting and physically draining open book test I had given on Sunday. Or perhaps my longing for so long quenched the thirst. I went through the previous trek on my blog to get a feel, but was more like a chore. My room-mate's enthusiasm was a welcome relief and I started feeling better.
Woke up at around 5:35am (what will we do without alarms :-/) and got to the bus stop around 7am (Me and my room-mate were the only ones in the BMTC bus from cmh road to Domlur, talk about freedom on Republic day ;) ). While we were waiting for the BMC cab to arrive, 4 trekking enthusiasts arrived on the opposite side of the bus stop. I knew most likely they were coming with us, but I thought let the cab arrive before letting them know the right direction. My bad luck, the cab arrived shortly in the direction they were standing! The cab was late and had not yet picked others from Life-style stop on Magrath road. But since, all 7 of us had already arrived, we saved the round-about trip via Domlur.
By the time we picked up all of them, traffic had built-up steadily and took a while to escape city limits. Me and Thiru tried to recall landmarks from our previous visit, along with prepping Prakash up. The one thing that me and Thiru agreed upon fully was the road widening work still going on (from Aug 2008! ). But I wasn't yet looking forward with eagerness of previous treks. The prospect of possible rain (as it was cloudy) assured me that everything was right - there was rain all 3 times I trekked before. When the hillocks became visible, I picked the tallest one and told Prakash that we are gonna climb it. Thiru understood my pun and joined in casually. We drew nearer to the hillock so close that Prakash must have started thinking about how we were to climb it :D
Around 9AM, we reached the Sagar hotel to have breakfast - the same one we had in 2008, with perhaps few more letters of the hotel's sign board missing. The 3 of us conversed with Arjun - the guide for the trek, he is a final year student but looked more like a 25 year old working professional! Antaragange is his speciality, which was evident during the trek.
We reached Antaragange around 10AM and after brief intro, we started our climb via the steps (I was disappointed a bit that we were not going via the other path). The most visible change from last time were the increased eateries at the base. And no. of monkeys. We climbed the steps leading to temple at good pace dodging the attacks from monkeys (a particularly vicious monkey scared the hell out of two kids, God knows how long they cried).
We had a brief stop watching the kids bathing in green pond below the perennial water source from rocks near the temple. It seemed all so very familiar, as if I had come there just a week before. The weather was perfect for climb - cloudy and little windy. As usual, I frequently troubled my camera (magically still working after the drop at Makalidurga) often so much so that the count was 224 pics by end of day! (800Mb). The trek felt pretty much like walk in the park and I was drawn rather to blooming cacti than enjoying the trek. 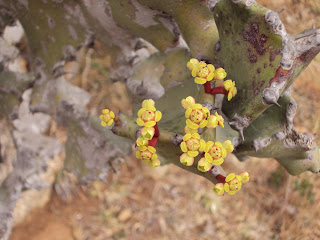 We reached a fairly large monolithic rock and stopped. I couldn't recall that place from previous visit. There were large boulders few paces in front, some of us went to click pics and came back to ask Arjun (our guide) if there's a way through it. Thats when he said it is the cave entrance and we were to go through it! What followed is a 3 hour experience I will forever cherish.
I am sure I won't be able to describe how we passed through the narrow, irregular, low, dark and tricky and put-your-own-adjective pathways. I will however strive to do so with pics! After all a picture is worth 1000 words ;)
Click on the images for larger view 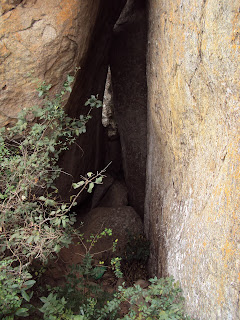 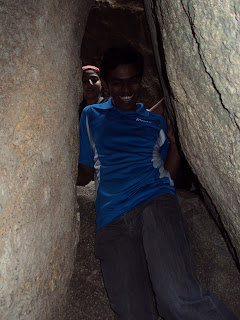 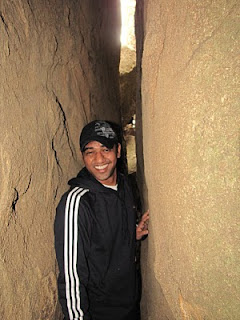 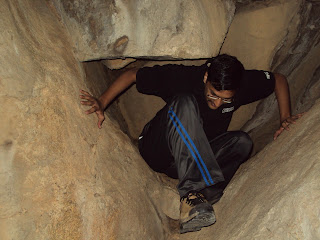 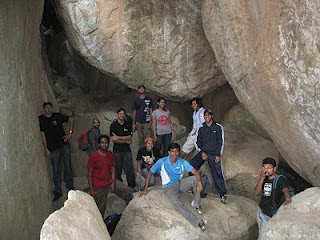 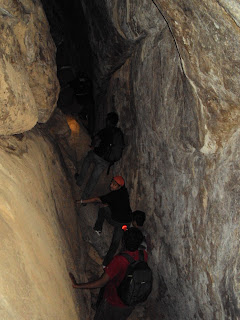 Notice the use of torch - it was very dark 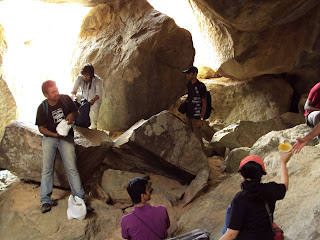 Around 12pm we reached the lunch spot 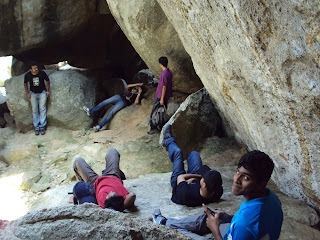 A pleasant rest in ac like weather (which is conspicuously missing in Bangalore these days). My friend Kathik called me (Airtel, good tower strength even inside caves :D) and asked where I was. I said 'inside a cave'. He was trekking at Kodachadri and stuck somewhere. He asked me how to proceed, but to his dismay I had to reply I had not trekked there yet :D He and his friends did eventually find their way and had a great experience. Now am wishing for a trek to Kodachadri :-/ 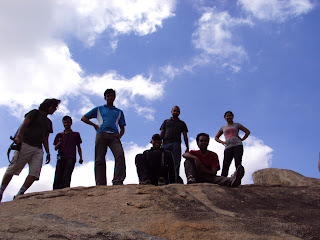 After lunch and rest, we climbed atop the cave
Clouds had thinned out Sun's warmth was pleasant 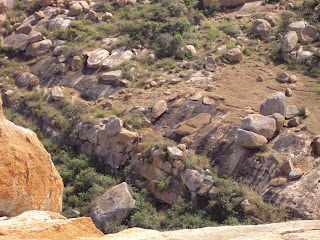 Can you spot a group climbing? It looked pretty
dangerous to us 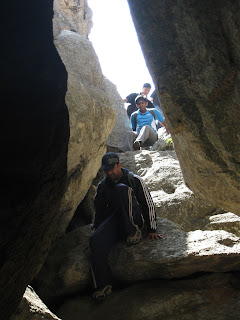 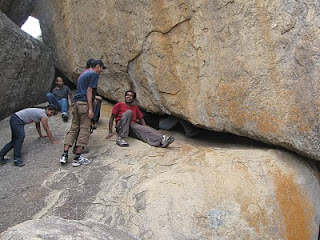 Out of the cave - relief! But Arjun wooed
few of us to go through that gap! 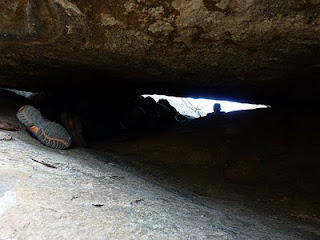 Here's how they went!
We were out of the caves and had good rest. But it was only 2pm yet. In Arjun's experience so far in guiding here, it was one of the quickest. As we had enough time left, I suggested to visit the fields to which everyone agreed! It was around 20min climb. It's a pretty flat space with land used for agriculture. There is even road connectivity beyond the fields as well as power lines.
Around 2:30pm, we started our long climb down with blazing hot Sun hovering over us. Surprisingly, we reached the temple within 30mins in one stretch. My legs were badly aching for fairly short-trek and I wondered how would I do Madhugiri trek again! After watching more monkey mania, we were on our way to Bangalore. Stopping at Sagar hotel again, we had snacks which were very tasty, thanks to our exhaustion.
Alternating between sleep and watching through window, I noticed a two-line rhyming 'sentences' written on a Lorry:
गाड़ी चलती है तो उड़ती है धूल
दुश्मन जलते हैं तो खिलते हैं फूल!
So, yet again a wonderful and memorable trek. Hoping for more in the coming days. And probably it will be Kodagu next ;)
A note of caution: Please do not attempt these caves unless there is someone well versed with the cave routes - it is very tricky and full of dead ends.
Posted by Sundeep at 3:31 PM