It ain't summer yet if I've not been to night trek with BTC. Regular trekking means repeat treks are unavoidable, but that is hardly an issue when you get to meet more awesome trekkers and with BTC fun is always a given. 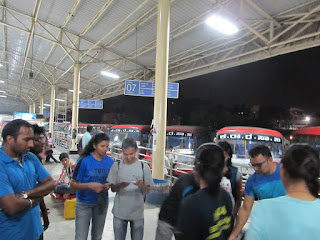 As usual, our meeting point was around Shantala Silk House - this time Terminal 3 at Majestic bus stand, as we were to take KSRTC bus to Chikkaballapur. Most of us were early to reach, to avoid missing out due to traffic, and started our intro rounds and catching up with trekkers familiar from past events. Our organizers Ankit and Veera had the unenviable task of ticking off members from the list as they arrived :P

Right on time at 7:45 PM, we got a bus with just enough seats for our large group of 21. Our discussions continued during the 100 minute journey - mostly on previous trek and plans like Himalayan trips. 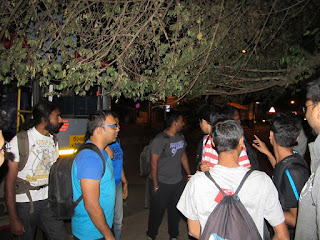 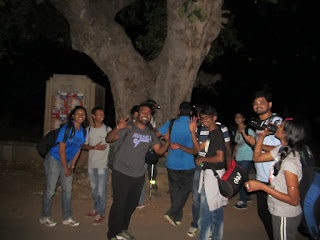 At Chikkaballapur, we had our formal intro session followed by organizers reminding us rules and regulations. We had about 5 KM walk ahead to the base of our hill. Depending on our comfort level, we split into multiple smaller groups, changed them often and chatted all the way. Now and then we would stop for everybody to regroup. An almost full moon and clear sky meant we didn't have to bring out our torches yet. It is surprising to look back and find that we walked about 90 minutes to reach the base while our climb took 100 minutes!

The guards of village at the base (read: dogs) gave us howling welcome as usual. Definitely scary for me. And as is norm, two of the silent ones accompanied us all the way to peak and came back down with us next morning as well. 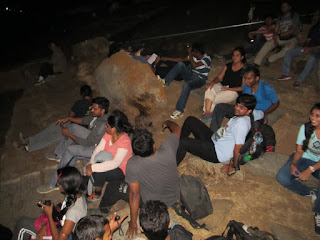 Just about one-and-a-half months since last trek and yet the initial climb takes time to get used to. Huffing and puffing, we reached the temple in about 15 minutes of climb. While we rested, we also signed our indemnity bonds (with accompanying light-hearted jokes as usual).

The sprawling lights below us were a treat to look at. One could spot the highway from movement of vehicles as well. But not many Stars visible, given the strong moonlit night. Apart from few thorny bushes, our climb was much easier now after the nice warm-up. Due to multiple routes though, Veera and Ankit had to consult and scout ahead now and then to make it easier for us. 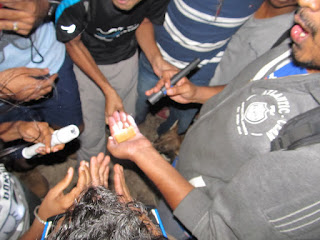 At midnight, we stopped at one of the numerous bare rocky space to celebrate Madhumathi's birthday. There was a tiny cake with match stick as candle to blow, we sang out of tune (but earnestly) and the girls even gave a mock birthday bumps.

More pit stops and 40 minute climb later, we reached the peak. Certainly recommended as a good choice of hill for beginners. After settling down, Ajita got all of us to gather closeby and enjoy first round of munching. From biscuits to mixtures to dry fruit to oranges and bananas, we passed it around. In the dark, it was ever more interesting to discover what we got handed. This was immediately followed by elaborate preparation and munching of delicious bhel puri. There were experts in cutting vegetable to stirring the contents as well as debate whether oil is used in mixing. Chants of 'Tel bina Bhel nahi' went unheeded :P 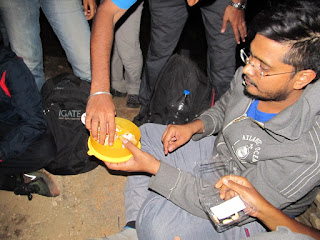 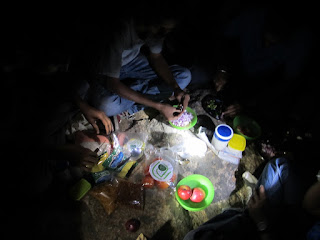 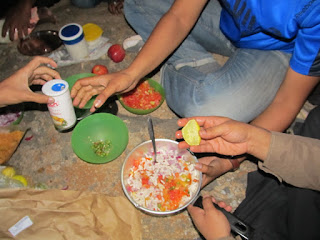 Then we spread out all over the peak into little groups again. Discussions and music - time flew by. Around 3 AM, we finally got around to making camp fire and preparing for the highlight of this trip. Everybody pitched in by bringing dry wood from different parts of the hill. We had to be careful to avoid thorns. 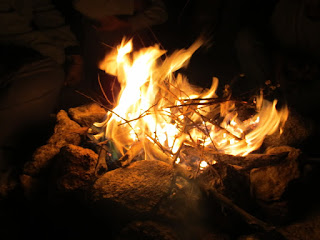 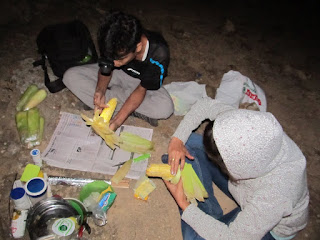 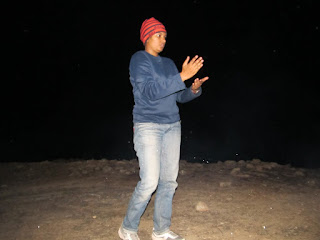 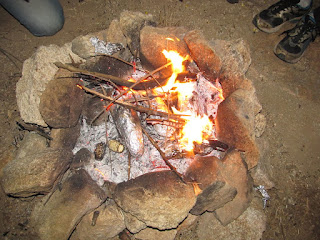 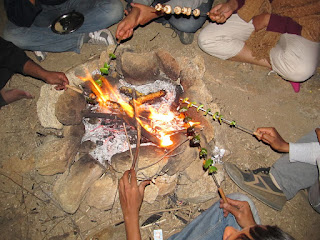 By that time, it was pretty chill and windy (we were all wearing warmer clothes, while some took to sleeping bags). After we got the fire going properly, Ankit and others took to preparing corn (and wrapped in foil), mushroom and capsicum (on sticks),  to be then cooked by us sitting around the camp fire. Hats off to Ankit for not only bringing these stuff, but coming prepared with all the right ingredients.

While we gobbled these delicious food items, we started our usual games in parallel. Started with Dumb Charades and moved on to Antakshri. We didn't try to be very competitive though :P and still had a jolly time. Again, time just flew off. About half an hour to 6 in the morning, some decided to catch few minutes of rest, while we kept the fire going to counter the decreasing temperatures. 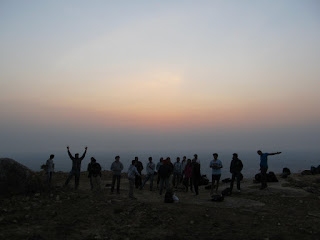 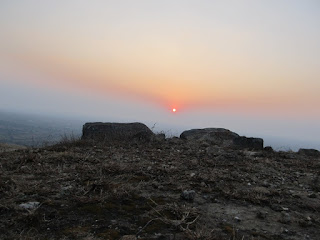 As the day became brighter, we took the opportunity to click more pictures while waiting for Sun to show up. With mist and cloud in the distance, we gave up and decided to take group pics and start our descend. Cheeky Sun broke free of clouds then and put on a decent show for us. 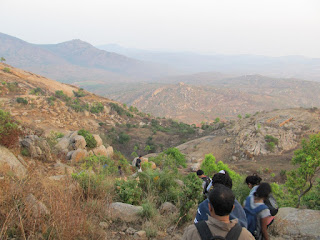 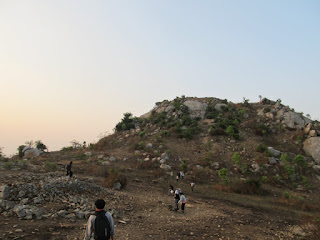 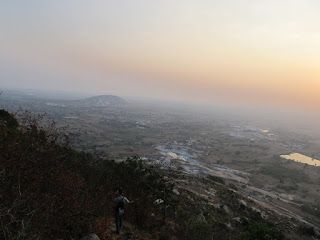 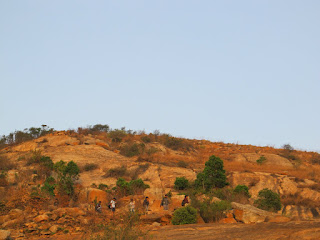 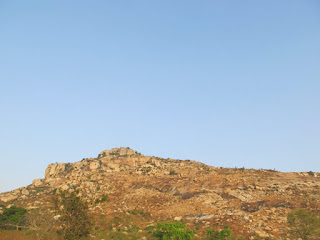 Climbing down was easy and quick - just about 45 minutes, with not much break except few minutes of path finding before the temple. It was a different route than previous night, more rocky and devoid of bushes. At the base, after everybody had arrived, we gathered in 'straight' circle for feedback session. There were plenty of suggestions as well as compliments dished out, especially for organizers and those who helped give us yummy snacks. 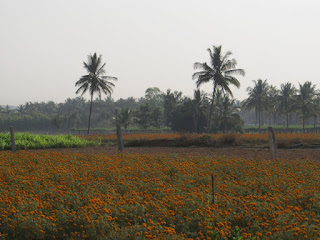 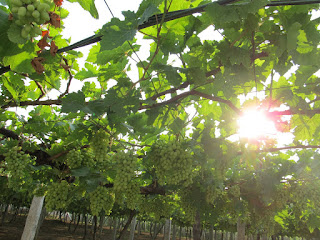 With Sun starting to show its true colors, we started our walk back to bus stand. On the way, we stopped a while at village bus stop in hope of hitching a ride. With none forth coming, we continued on, much like previous night - chatty in small groups. About half way (after passing vineyards with pleasing green grapes), we hopped on bus going on its way to Chikkaballapur bus stand. The conductor then helped us catch Rajhamsa (more comfortable with its push back seats :P) to Bengaluru. We caught a short nap before stopping by a hotel on the national highway for breakfast and cup of tea. All in all, yet another fabulous event with BTC :)
Posted by Sundeep at 11:25 AM