Sharavathi Backwaters and Nagala Natural Pools had introduced me to pleasure of life-jacket supported water splashing. The allure of River Rafting was hard to ignore, more so having missed an opportunity back in 2011. And Dandeli is perhaps the most famous rafting location in South India. 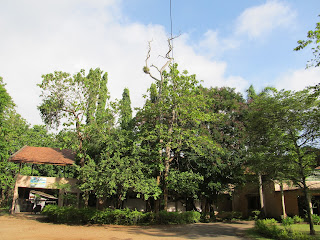 Early Saturday morning, we reached "Jungle Lodges and Resorts" for freshening up. Despite traffic induced late start the previous evening and a minor vehicle breakdown, we weren't pressed for time. After breakfast near Dandeli bus stand, we came back to wait for morning rafting batches to start. Jungle Lodges had plenty of trees, chirping birds, Malabar squirrels, and the likes. A lone cat was patient enough for friendly pats and petting, but would suddenly jump sometimes. Sleeping and howling dogs completed the picture.

After signing our names (first of many), we had a exhilarating jeep ride to the rafting spot. The driver was even more maverick than our Tempo driver, if that was possible. On the way, we stopped for a short while besides a road bridge over the Kali river. The dam gates were visible on the far side, trees and still water completed the tranquility. 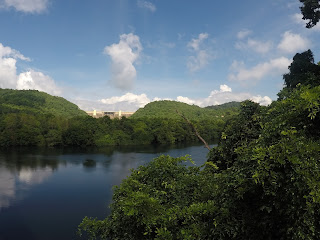 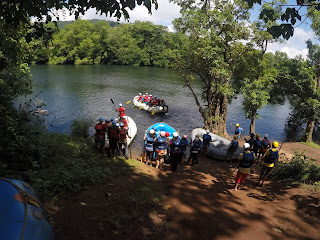 Shortly later, we arrived on the river bank, followed by other jeeps and the Raft transport. Instructors showed how to strap our life jackets and helmets (they did the final touches anyway in the end), told that we were on a ~90 minute, 8km outing. Being a 12 member group and maximum 8 (excluding the instructor) on a raft, it took a while for us to form the groups. Chief reason being Pradip having brought GoPro camera! Everybody wanted to be with him. Finally, Santosh (our organizer) led the way and pulled myself, Ikshit and Ahmed as the unfortunate 4 member group while Syed, Pradip, Prakash, Lohith, Neha, Deepashree, Jyothi and Sumithra had a whole raft to themselves. Turned out later, even their instructor was better than ours. But these small inconveniences paled in comparison to the main activity - rafting.

Once we had settled inside the raft and left the river bank, our instructor led us through various moves (forward/backward), how to grip the paddle, how to use paddle, how to grip one of our foot inside, way to pull a team mate in and commands (forgot the names, it was like get down, stop, jump, etc). And then we were told to jump. Getting back in was very difficult though.

On we paddled forward, with great enthusiasm and soon enough our shoulders ached. Stop paddling was became our best command to hear. There were five rafts in total and a lone Kayak (for fast rescue). 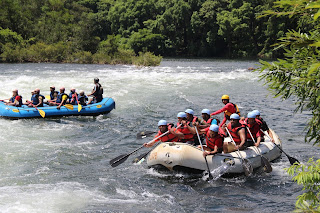 The river flow was quite sedate till we reached our first rapid (about 8 in all). Strategically placed cameraman took our photos. Everyone had to get down on our knees inside the raft and hold tightly. We did a little U-turn to skim the rapid on the edges again before moving forward again. This one and the last rapid were the most memorable ones.

From then on, the river's flow was steady, not the near-still water we started with. That and presence of rocks meant that there wasn't any more opportunity to jump from the raft. We kept peppering the instructor with questions, and a little annoying by constantly asking him to not hurry us. Thick trees surrounded us on both sides, boulders here and there. Before starting, I thought 90 minutes would be too long and boring, on the contrary it soon became clear that it was too less.

Paddle, stop, get down/paddle. Sort of became a routine until we got opportunity to rotate. This happens when one side paddles forward and the other backwards. We hit rocks and branches now and then, some due to not paddling in sync in time.

And, too soon, we came upon the final rapid. Not big length wise like the first one, but formation was such that we dipped inside the flow. And the bonus? we could paddle around wide, hold some branches while other rafts were ahead and dip inside again. We took turns to sit at the tip of raft in front and everybody had to get down with both knees inside the raft, holding the paddle vertical. About 4-5 we repeated the exercise to give a long lasting impression.

Reluctantly, we had to leave. Ahead was a particularly tranquil section with trees arching overhead. Our instructor managed to stop us from creating any sort of noise and then proceeded to clap forcefully :D

Our jeeps were waiting for to take us back to Jungle lodges. Of course, we took plenty of group pics before leaving. Morning clouds had parted and rather sunny and hot afternoon awaited us. Before going to our home stay (Kulgi Nature Camp), we stopped near Dandeli bus stand to collect snaps taken at the first rapid - 100+ photos for our two rafts. Tired, wet and hungry we reached Kulgi. After a bit of mis-understanding, we got our dormitory. Every structure was named after nearby tourist spots and popular wildlife there. Lunch (and those that followed) was tasty and filling. We then idled a bit inside a sitting room. Trees around everywhere, birds chirping, Langurs mischievous, Malabar squirrel enchanting.  I gave Syed company, but it was clear that he was a big enthusiast and knew the birds by name and had the best camera to click them. 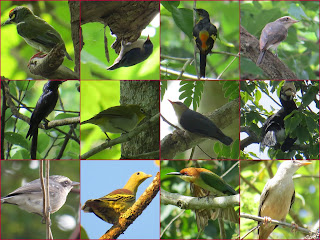 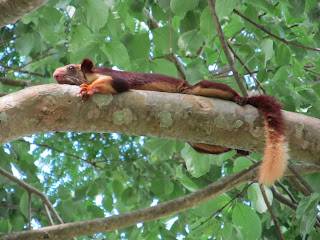 Post lunch, Santosh and Lohith (the co-organizer) inquired around and got to know about Syntheri rocks. Despite our sleepiness, everybody was enthusiastic to visit rather than idle about. It took about an hour (despite our TT driver's maverick speeds) to reach (and more than a few inquiries about the way). 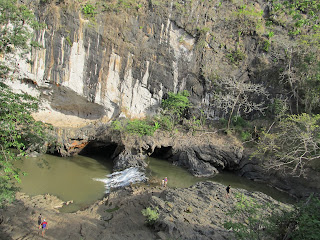 We managed to sneak just 10 minutes before scheduled close and get permission. The name refers to about 300 feet granite cliff, at the base of which stream flows and the rocks forming a small natural caves and falls - all in all giving a pleasing view. Too many honeycombs are present on the cliff face. Different type of rock compositions were displayed along the irregular stepped way from parking to stream. After spending a good while (and of course numerous profile clicks) we returned on an alternate path to avoid the steps.

When we reached back to camp, it was about dinner time. But first we were all (including other groups camped there) invited for video presentation on Dandeli-Anshi Tiger reserve, Elephant relocation, importance of wildlife ecosystem (focusing on Tiger), etc. And then we had sumptuous dinner.

With time to kill, Jyothi proposed to play "Truth or Dare" which became just "Dare". We used a water bottle to pick next bakra based on which direction the bottle pointed after spinning. And then we moved on to Dumb-Charades until it was time to sleep. 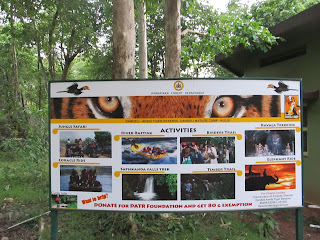 We woke early morning to get ready for trek to Sathkanda falls. Syed, Santosh and myself went for a walk outside in search of birds which ended in vain. We needn't have bothered, there were plenty within the camp. After Uppittu and Avalakki for breakfast, we checked-out, kept extra luggage in TT and were in for a refreshing trek. The guide started by pointing out my red T-shirt (yellow and white are other colors) as not recommended within jungle. Luckily I had a black full-sleeves (which proved useful).

The guide gave a short talk about the ~300 bird varieties to be found and cautioned that we might encounter big wild animals on the way. There were plenty of plants on either side of our path trying to bite us with thorns (and hence the helpful full-sleeves, full length track pants plus shoes also recommended). On the way, the guide kept us informed about the various trees, birds, a poisonous fruit (favorite amongst Hornbill, the seed is poisonous and avoided by the bird), bear marks on trees, etc. 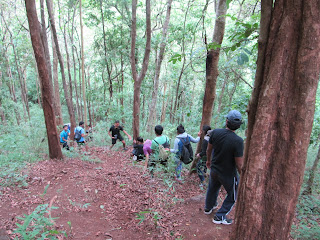 While the track seems easy at first, soon came a stretch of rolling and slippery path. Ill suited sports shoes were especially troublesome. Some slid purposefully, some fell involuntarily. Good fun though. 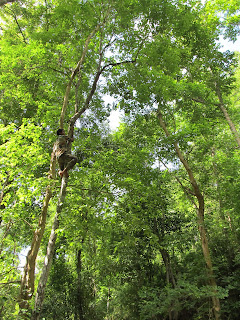 Soon we came across dried rocky stream beds (they are full in monsoon). About an hour into the trek, we had a break by a large tree trunk strewn across the path. Apples, dates, etc were passed around, Santosh was in earnest discussion with the guide, Ahmed was busy telling us to sit in a line for photography, etc when suddenly we heard a low grumble. It was repeated and everybody fell silent. The guide did his best to reassure that the sloth bear wouldn't attack a huge group. He climbed a not-so thick tree very high to try and spot the bear but it was probably hiding well. After nervous minutes, we resumed our trek.

Deepashree seemed most affected and from being amongst last trekker, she became amongst the fastest and in front always till the falls! 20-30 minutes later, we finally came across stream leading to waterfalls and stopped for a mini break and photography. 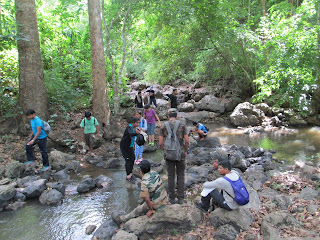 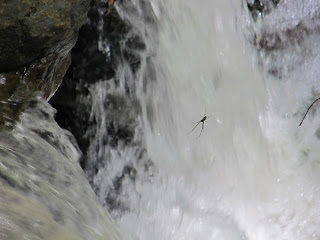 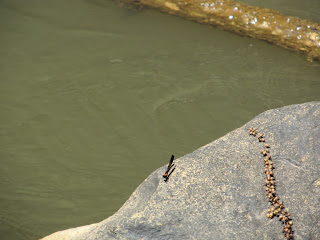 The falls was still an hour away though. Traversing the boulders became a bit tougher than the previous leisurely walk. Plenty of spider webs and dragon flies around. When we finally reached the falls, it was pretty hot to touch the rocks. The water flow was good, given monsoon hadn't arrived yet. We took turns to be massaged and clicked (courtesy Pradip's GoPro). 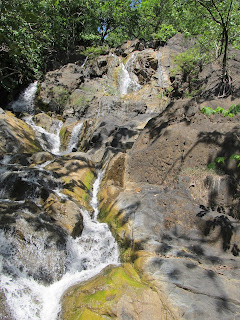 Yet again, we were reluctant to leave water, but all things, good or bad, has an end. We continued our way forward, about 2 km to reach the road and another 2 km to reach the Nature camp. Despite filling running water, we were left short given the thirst and hunger. And thorny plants stuck to our ears and dresses and hairs. About 1 km before the camp, there's a watch tower which provides a beautiful view of thick forest and hills around. A small dead baby snake (King Cobra if I remember correctly) was spotted lying around and had the pleasure of being photographed. Before which, the guide was explaining how bears break lice mounds in search of queen lice. 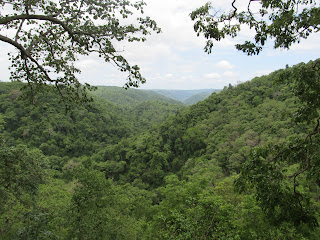 Even though we had checked-out, we had ordered lunch again at the Nature Camp. Needless to say, it was awesome again. The elderly Marathi speaking cooks seemed to be constantly arguing amongst themselves, but when it came to food, they were definitely experts.

Our guide had recommended to visit Syke's point, but we couldn't get permission and resulted in bit of frustrating run around in TT. Nevertheless, it was a weekend well spent and memorable in many ways. Thanks to Bangalore Hikers for organizing such a wonderful trek. On the way to Bangalore, we stopped at Dharwad to buy famous peda and other savories. For dinner (which got delayed as we were busy watching 3 idiots movie), we stopped by a Punjabi hotel (which I remembered from my Surat trip) - food wasn't great compared to healthy and tasty ones we had at Kulgi Camp.
Posted by Sundeep at 3:55 PM

Nicely narrated the complete event activities in a single blog ;)